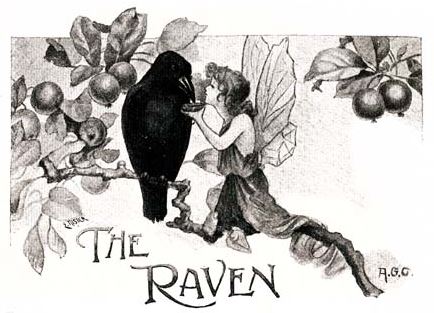 There once was a Queen who had a little baby daughter, and one day the child was naughty and would not be quiet. Now, there were some ravens flying round and round the castle, and when the Queen saw them she opened the window, and said impatiently,
“I wish you were a raven–I might have a little peace then.”

She had scarcely spoken the words when the child changed into a raven, and flew from her arms, out through the window. It flew away to a dark wood, where it remained for a long, long time, and the parents heard nothing of their lost child. But one day a man was going through the wood and heard the raven cry, and followed its voice until he came near to the bird, when it said,
“I am a King’s daughter by birth, and have been bewitched into this form, but you are able to release me.”
“What can I do?” he asked.
“Go farther into the wood,” answered the raven, “and you will find a little house, inside which an old woman will be sitting. She will offer you food and drink, but you must not take them, for if you eat or drink anything at all you will fall into a deep sleep and will not be able to release me. In the garden behind the house there is a big tan-heap; you are to stand upon it and await my coming. For three days running I shall come to you at two o’clock in the afternoon, and I shall drive in a carriage which on the first day will be drawn by four white horses, on the second by four chestnut ones, and on the third day by four black ones, but if you are not awake you cannot release me.”

The man promised to do all she asked, but the raven said,
“Alas! I know beforehand that you will not release me; you will be sure to take something from the woman.”

Again the man promised earnestly that he would touch neither food nor drink. But when he reached the house the old woman came to meet him, and said,
“Poor man! How faint and ill you do look. Come and take some refreshments. Eat, drink!”

“No,” replied the man, “I will neither eat nor drink.”

But she gave him no peace, and at length said,
“Well, even if you will not eat, you can at all events take a draught of something.”

Then he allowed himself to be persuaded, and drank.

In the afternoon, when it was nearly two o’clock, he went out into the garden to the tan-heap to wait for the raven. As he stood there he suddenly became so tired that he could not resist lying down for a few minutes, but he did not mean to go to sleep. However, he had scarcely stretched himself out before his eyes closed themselves of their own accord, and he fell so fast asleep that nothing in the world could have awakened him. At two o’clock the raven came driving up with the four white horses; but she was very sad, for she said,
“I know he is asleep.”

When she came into the garden, there, sure enough, he lay, fast asleep upon the tan-heap. She got out of the carriage, and shook him and called to him, but he slept on.

The next day at midday the old woman came again and brought him food and drink, but he would not take it. But she worried him so that at last he consented to take just one draught from the the glass. Towards two o’clock he went out into the garden to the tan-heap to wait for the raven; but again he was so overcome with fatigue that he fell asleep. When the raven came she went up to him, but he slept so heavily that she could not awaken him.

The next day the old woman placed a dish of food and a glass of wine before him, and as the smell reached his nose, he could resist no longer, but took a good draught.

When the time came he went out into the garden to the tan-heap, to await the King’s daughter, but again he fell asleep.

At two o’clock the raven came driving along with her black horses. The coachmen’s livery and all the trappings were of black too, and the raven was plunged in the deepest sorrow, “For,” said she, “I know he will be asleep, and will not be able to release me.”

When she stood by his side he lay there fast asleep, and though she shook him and called to him, she could not awaken him. Then she laid a loaf of bread beside him, next a piece of meat, and thirdly, a bottle of wine, and of these things he might take as much as he pleased without their ever growing less.

After that she took a golden ring from her finger, upon which her name was engraven, and put it upon his. Lastly, she laid a letter beside him, in which she told him that, if he still wished to release her, he was to go to the Golden Castle of Stromberg. After that she drove away.

When the man awoke he was very much grieved to find he had missed the raven again; but when he saw the things lying beside him, and read the letter in which was written all that had happened, he got up at once and set out for the Golden Castle of Stromberg, though he had no idea in which direction it lay.

When the hour came at which people light their candles, he saw one glimmering in the distance. He got up and went towards it, and came at length to a house, which appeared to be very small indeed, because a tall giant was standing in front of it.

When the giant saw him he said,
“I am very glad to see you, for it is a long time since I had anything to eat and I will swallow you down for my supper.”
“I think you had better not,” said the man, “for I don’t care to be eaten, and if you are hungry I can give you plenty to satisfy you.”
“If that is true,” the giant said in return, “you need have no further fear. I was only going to eat you because I had nothing else.”

So they sat down together and the man brought out the bread, meat, and wine which never came to an end.

“Ah!” said the giant, “this is very good indeed,” and he ate as much as he required.

When they had finished, the man asked him if he knew where the Golden Castle of Stromberg was.

“I will look for it on my map!” answered the giant; “every town, village, and house is marked upon it.”

He fetched the map, but the castle was not marked upon it.

But they looked in vain. The man would then have gone on his way, but the giant begged him to wait a couple of days until his brother came home.

When he came, they asked him if he knew the Golden Castle of Stromberg, and he answered,
“When I have had a good meal I will look for it upon my map.”

The second giant searched for a long time. At length he found the Golden Castle of Stromberg; but it was many thousands of miles away.

“How shall I ever get there?” asked the man, and the giant answered,
“I have a couple of hours to spare, and will carry you to within a hundred miles of the castle; the rest of the way you can easily go by yourself.”

So at length, after much travelling, the man came to the Golden Castle of Stromberg. It stood upon the top of a mountain of glass, and the enchanted maiden drove round the castle in her carriage, and then went into it.

Although he was delighted to see her, he could not reach her, for each time he took a step upon the glass, he slipped backwards.

So he built himself a little hut, and sait in it a while year, watching the King’s daughter drive round the castle every day, without being able to get up to her.

One day, when he was in his hut he saw three robbers fighting, and called to them,
“Good luck to you!”
They stopped at the sound of his voice, but when they did not see anyone they began to fight again, and this time most fiercely.

One of them told him he had found a stick, a tap from which would open any door; another said he had found a cloak which rendered him invisible whenever he wrapped himself in it; but the third said he had found a horse with which one could ride over anything, even a glass mountain. Now, they could not agree as to whether the things belonged to them in common, or whether they should be divided. The man said,
“I will give you something in exchange for your three things. It is true I have no money, but I have other things of greater value, but first I must prove them, to see if you have spoken the truth.”

So they allowed him to get upon the horse, put the cloak round him, and gave the stick into his hand; and when he had them all, of course they could no longer see him.

He gave them some mighty strokes with the stick, crying,
“There, you villains, you have got what you deserve, so be contended.”

Then he rode up the glass mountain; but when he came to the castle the door was closed, but he struck it with his stick, and immediately it flew open.

He entered and mounted the staircase until he came to the hall where the maiden was seated, with a golden cup full of wine before her. But she could not see him, on account of his cloak.

When he stood before her, he drew the ring which she had given him from his finger, and threw it into the cup, so that it clinked. And she cried,
“It is my ring, and the man who is to release me must be here also!”

They searched the whole castle for him, but could not find him, for he had gone out seated himself upon his horse, and cast off his cloak. So when they came to the castle gate they saw him, and cried aloud with joy.

He dismounted and took the King’s daughter in his arms, and she kissed him, and said,
“You have set me free, dear, and to-morrow we will be married.” 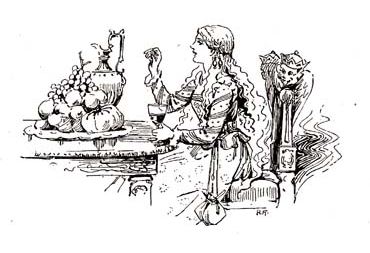